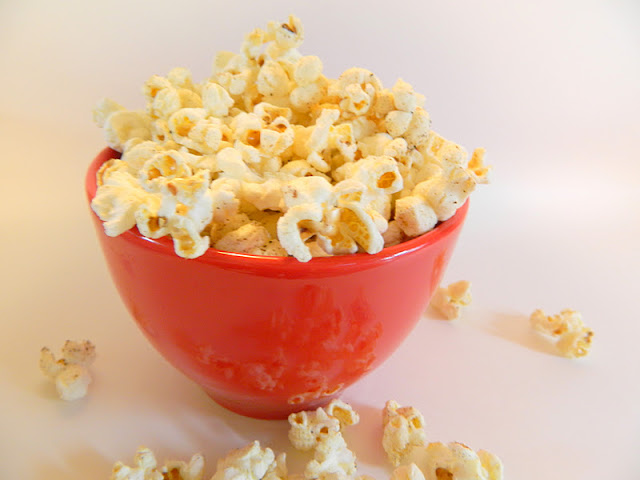 There's so much you can do with popcorn that doesn't involve a microwave - caramel corn and kettle corn being some of the more common examples. Both are widely available commercially, but like most things, making it at home is infinitely better - I for one like my kettle corn a bit more on the salty side, and making it myself allows me to manipulate the hot, unpopped kernals however I choose.

As long as you have a pot with a small footprint (8 inches across or so) and tall sides, you can make basic popcorn at home. Kernals, salt and vegetable oil are cheap and the whole process is quick. Creativity comes in when you pop your kernals in flavored oils or use flavored salts, much like Josh did last night at 1 AM.

Add oil to the pot and heat over medium heat for about a minute before adding popcorn kernals. Immediately after adding kernals, sprinkle in salt and other seasonings to taste, then cover the pot and shake it up. Keep the pot moving over the burner as the popcorn pops to keep it from burning.

Immediately after the kernals have popped, remove to a bowl. Add additional seasonings if needed. I'm back. I'm hoping to be back regularly. And since every piece of advice I've ever read on blogging says not to apologize or offer excuses for prolonged blogging absences, I won't. On to the recipe!

These have become a Christmas day tradition over the last few years. For as long as I can remember, we've had a Christmas Eve tradition, where we ditch the cooking for a night and go out for a big, splurgy dinner at a fancy restaurant - usually Italian. I took it upon myself to add a little structure to Christmas day, and started the tradition of baking up homemade cinnamon rolls for Christmas morning. I make the dough the day before, and wake up before everyone else to start rolling the dough out. The clattering of pans and rolling pins generally means I won't be alone in the kitchen long.

To make the dough, heat the milk, vegetable oil, and sugar in a medium saucepan over medium heat to scald it (right before it boils, about 200 degrees). Remove from heat and cool to warm. Sprinkle yeast on surface of milk and let it sit on the milk for 1 minute.

Add 8 cups of the flour. Stir until combined, then cover and set aside in a warm place for 1 hour. After an hour, remove the cover and add baking powder, baking soda, salt, and the remaining 1 cup flour. Stir thoroughly to combine. At this point you can use the dough right away and start to assemble the cinnamon rolls, or refrigerate for up to 24 hours, punching down the dough if it rises to the top of the bowl. (Note: dough is easier to work with if it’s been chilled for at least an hour or so beforehand.)

To assemble the rolls, remove half the dough from the bowl. On a floured baking surface, roll the dough into a large rectangle, rolled very thin.

To make the filling, pour 3/4 cup to 1 cup of the melted butter over the surface of the dough. Use your fingers or a pastry brush to spread the butter evenly. Generously sprinkle half of the ground cinnamon and 1 cup of the sugar over the butter. Use more butter and/or sugar/cinnamon as needed and desired.

Beginning at the end farthest from you, roll the rectangle tightly towards you. Keep the roll tight - I find sometimes it's easier to fold the dough over itself. When you reach the end, pinch the seam together and flip the roll so that the seam is face down.

With a sharp knife, make 1/2-inch slices. Pour a couple of teaspoons of melted butter into cake pans and coat. Place the sliced rolls in the pans.

Repeat the rolling/sugar/butter process with the other half of the dough and more pans. Set aside to rise again for at least 20 minutes before baking. Bake for 15 to 18 minutes, until golden brown. Don’t overcook!

In the meantime, make the icing: in a large bowl, whisk together the powdered sugar, milk, butter, and salt. Whisk until smooth. Taste and add in more ingredients as needed until the icing reaches the desired consistency/flavor. The icing should be somewhat thick but still very pourable.

Remove pans from the oven. Immediately drizzle icing over the top.