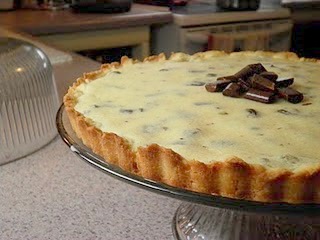 This chocolate and ricotta tart is light, fresh and easy to make. I do wish I had gone with a different pastry - something saltier and flakier - but for the quick pastry it is, it works well with the ricotta filling. We had a couple of pieces once it cooled, and left the rest of the tart in the freezer for several weeks until the day after Thanksgiving, and it froze and defrosted perfectly.


The 2010 November Daring Bakers’ challenge was hosted by Simona of briciole. She chose to challenge Daring Bakers’ to make pasta frolla for a crostata. She used her own experience as a source, as well as information from Pellegrino Artusi’s Science in the Kitchen and the Art of Eating Well.
These challenges are helping me to better equip my kitchen - I've been after a tart pan for ages, and even though we were allowed to make a free-form tart, I took this challenge as the best excuse I could fathom to get my hands on a tart pan! 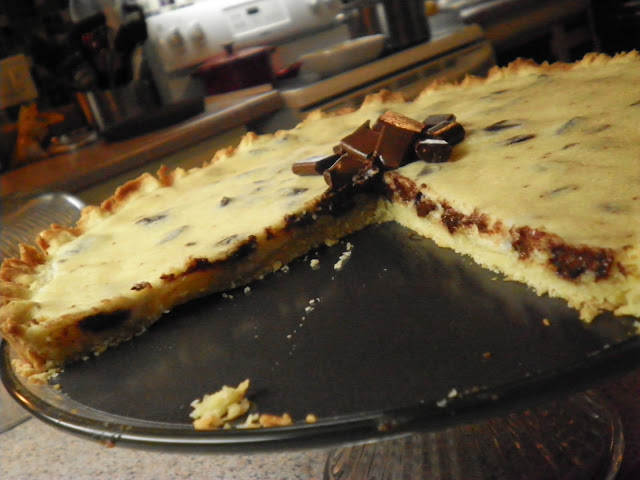 The recipe I used came from Broxholm Road (warning: measurements are given in Metric format, so some conversions and/or a kitchen scale are necessary).
And here's the challenge post.
0 comments 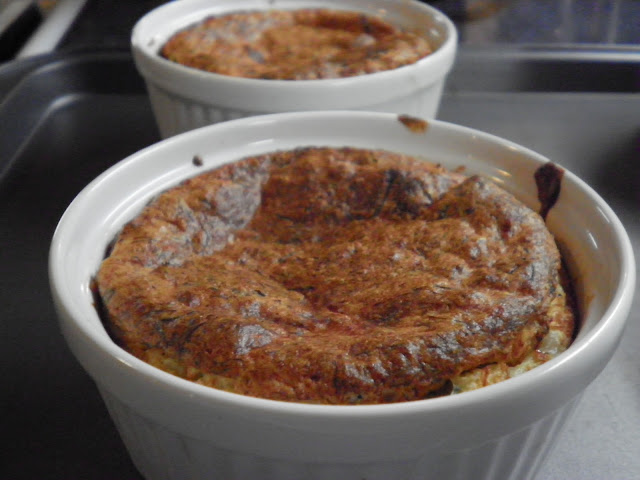 I have a hazy memory from my childhood involving the '80s cartoon version of Alvin and the Chipmunks and souffles. One of the Chipettes - the chubby one - was some sort of master chipmunk cook who one day took on the task of whipping up a gorgeous souffle. Details are sparse in my memory, but I do remember she was very upset when a loud noise caused her souffle to fall and puddle around itself.

Way to turn a budding cook off from ever bothering.


Dave and Linda from Monkeyshines in the Kitchen chose Soufflés as our November 2010 Daring Cooks’ Challenge! Dave and Linda provided two of their own delicious recipes plus a sinfully decadent chocolate soufflé recipe adapted from Gordon Ramsay’s recipe found at the BBC Good Food website. 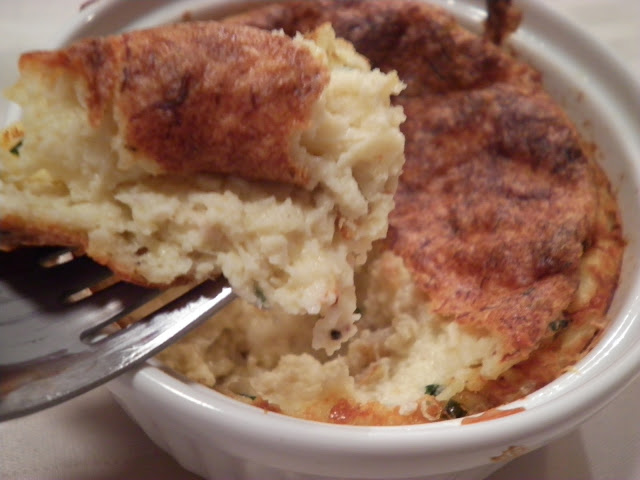 Seriously, y'all - I can't believe this came out of my oven. I made this. It was all things a souffle should be: light, fluffy, decadent. I didn't dare open the oven door or make a sound as they rose perfectly, but I did squeal inwardly with delight.

Even though in the 45 seconds it took me to retrieve my camera, turn it on and set the focus to macro, all of the souffles had deflated, the deflation was not as extreme as the Chipette's. It stayed intact and was incredibly tasty. I am so excited to try this base with a number of different fillings sweet and savory, but this Gruyere-crab combination is the stuff a home cook's dreams are made of.

Here's the link to the original challenge post.
And here's the recipe I used from The Kitchn (adding a generous handful of crab meat and chives to the bechamel).
3 comments 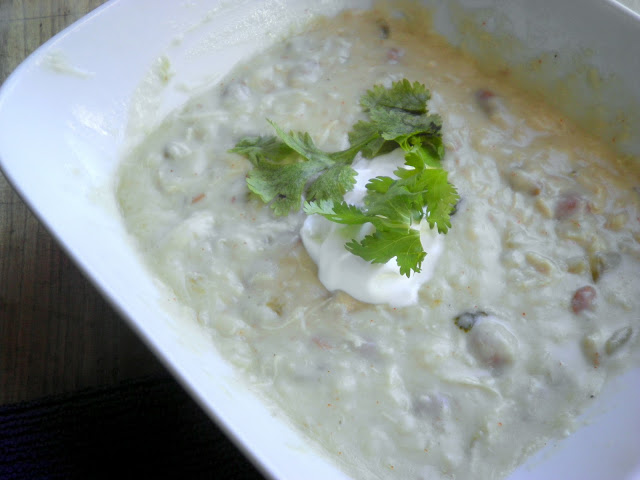 I moved to Nashville friendless. Friendless and jobless (but fortunately, not homeless). I moved here not knowing a soul and never having stepped foot in the city. It was a huge leap of faith that could have brought any number of horrendous consequences, but this is very clearly where I'm supposed to be, and it's turned out to be best thing I’ve ever done.

The first friend I made in Nashville was a co-worker, a relationship that I long shied away from working in Human Resources, but she was relentless in her pursuit to engage me in conversation. Eventually she wore me down. Among other things, we bonded early on over our love of food and consequently, our diet and exercise hurdles and accomplishments (around the time we met, we had both recently shed 35 pounds). However, it didn’t take long for it to become clear that our cooking styles were radically different – she is a clean cook, who is all about ease and as few ingredients and steps as possible. I am a tornado in the kitchen and prefer to make complicated recipes as long and drawn out as possible. Where she reaches for Hershey's chocolate syrup, I’m measuring milk, corn syrup and cocoa powder and boiling it in a saucepan myself. She deems this “Vicki-tizing” a recipe.

Early on, she shared a recipe with me for White Chicken Chili, which includes diced green chilies, Great Northern beans, onions and cream of chicken soup. It did not disappoint, and I made it to the letter for years. I’m sure you know where this is going – in my quest to obliterate processed foods from my diet, I recently began making my own “cream of” soups, and this chili was my first guinea pig recipe. I noticed the difference immediately – the chicken flavor was more pronounced, the mixture itself was much paler than the familiar condensed soup day-glo yellow, and I felt much better eating it knowing there was not a trace of xanthan gum or maltodextrin in my soup.

This recipe includes the homemade cream of chicken soup, but if you can’t break free from the can, dump two whole cans into a soup pot, and proceed to “for the soup, you will need...” It's delicious either way.

For the cream of chicken soup, you will need:

Melt the butter in the bottom of a heavy-bottomed soup pot. Once the butter is melted (do not allow to brown), add the flour and whisk constantly until smooth, forming a roux. Add the warm milk to the roux and whisk constantly over medium-low heat until the mixture begins to thicken. Once the sauce coats the back of a spoon, add bouillon cubes and chicken stock and stir. Season with salt and pepper to taste.

For the soup, you will need:

In a separate skillet, heat olive oil over medium heat. When oil is hot, add the diced onions and cook for 5 minutes before adding chiles and garlic. Cook for 2-3 minutes, then add to cream of chicken soup mixture. Add all spices, salt and pepper to taste. Add shredded/cubed chicken and beans, and simmer slowly for approximately 10 minutes.

Note: this produces a very thick, chowder-like soup. If you like your chili/soup thinner, add another cup of chicken broth or stock. 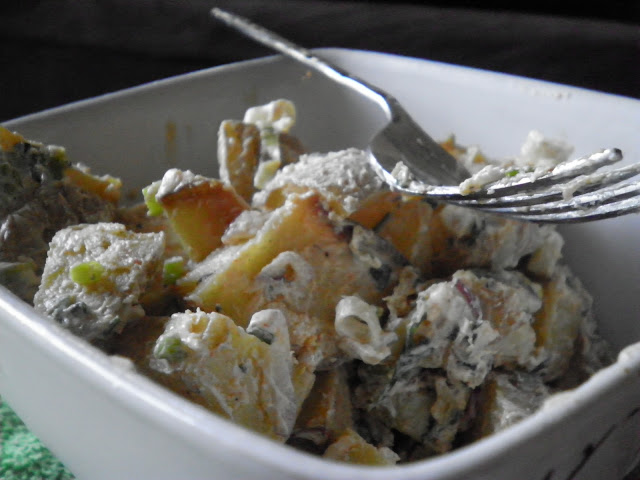 As fall approached (and soon returned from whence it came, but that’s neither here nor there) this year, in the midst of stockpiling canned pumpkin, planting potted mums and dreaming up Halloween costumes, Josh and I attempted to wax nostalgic about the autumnal orange-hued pleasures of last fall.

We got nothin’. Not a single memory apart from making a mad dash to a Halloween superstore on Halloween to rummage through the wreckage of picked-over eleventh-hour bits and bobs left over from Halloweeners with better organizational skills (and far more free time). Somehow we managed to find cohesive costumes in a pair, even though our “costumes” consisted only of devil horns. But I digress.

Our memories of last fall are inclusive of little aside from turning Lowe’s into our second home, my griping about that blasted second coat of paint, packing up my apartment and covering ourselves in sawdust. Hearty homemade meals, mums, weekend baking and pumpkins? Not so much when deep in the throes of an all-consuming home remodel. We didn't even have an operational oven.

Needless to say, this fall I have been nothing short of the happy homemaker, with my 18 cans of pumpkin on reserve and purple (what else?) fall mums coddled occasionally tended to by the front door. I’ve baked sticky, sugary, cinnamony treats every weekend, have fed my family their fill of slow-cooked meats and ensured their bellies are full of hot, chunky soups.

So when Alyssa of all people requested salad for dinner last Friday night, and Josh requested grilled burgers, I resolved to find a side dish that would throw a little fall into our suddenly-summery early November evening meal. There’s nothing I love more than potatoes with burgers, but sweet potato fries seemed too easy, too obvious. Cold, boiled potato salad would be all wrong.

Enter: roasted potato salad. Served warm or cold, roasting the potato chunks prior to tossing them in mayonnaise brings out amazing caramelized flavor, and a depth you would never find in a boiled potato. I’m not sure I’ll ever serve potato salad another way; since potato salad is so versatile as it is, it can be easily customized to suit your favorite potato salad recipe. Just roast the potato pieces instead of boiling them. Who knew? 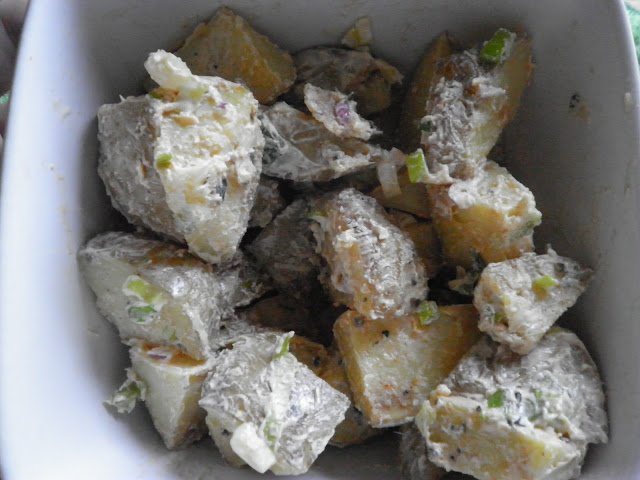 For my variation, you will need:

Preheat the oven to 450 degrees. Toss potato pieces in a bowl with olive oil, salt and pepper. Roast on a sheet pan or pizza stone for 20 minutes, until easily pierced with a fork. Remove potatoes to a plate and let cool to nearly room temperature if serving warm, or cool in the refrigerator if serving cold. 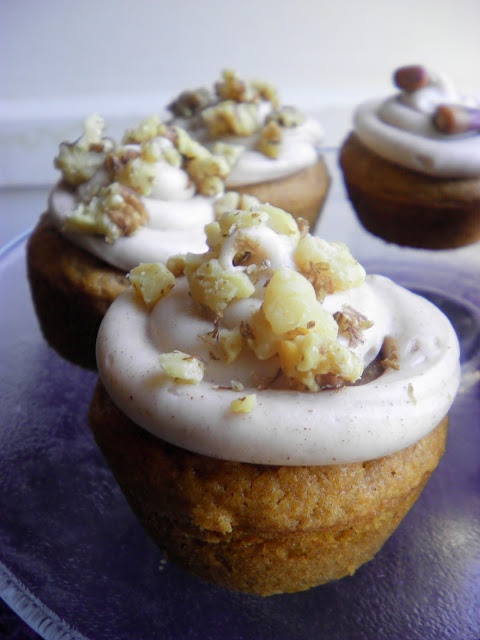 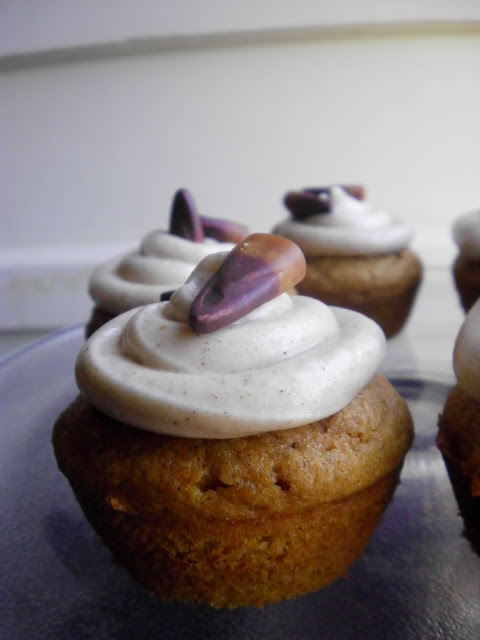 All I did for these was adapt the recipe for pumpkin cream pies into pumpkin cupcakes with cinnamon cream cheese frosting. I topped some with caramel-chocolate candy corn and some with toasted walnuts. 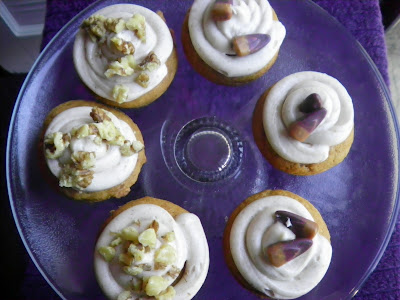 By the way, I've finally figured out a good lighting situation in my house...now I want to re-take all of my food pictures! I just might do that...
0 comments