First of all, I have to get this out: OH MY GOD we have an oven.


You're thinking, ok - so do I, overly-emphatic oven lover, stater of the obvious and sharer of nonessential news. Well, try living without one for almost 6 months and then re-read this post. Maybe you'll get it then.

Back when we were putting the kitchen together, I have to say with complete dorky honesty that I was most anticipating sliding the stove in its little nook. That seemed so final. It meant my kitchen was functional and finished, and that meant I could get to cooking. But something went wrong. Josh is a whiz when it comes to household stuff - he can do plumbing, lighting, electrical work, construction and carpentry. There's not much that falls beyond his grasp, which I am continuously amazed and confused by.

Talent notwithstanding, he accidentally crossed some wires when hooking up the stove (appropriate electrical technology description fails me) and we watched in brief horror as the clock display zapped off the screen and the top of the stove began to smoke. There was no going back - the computer controlling the clock and oven settings was fried, and the oven was rendered useless. Palpable disappointment aside, we consoled our loss with the realization that the stovetop still worked, the oven control computer could (eventually, as it was a $170 part) be replaced, and we could use the toaster oven and outdoor grill in the meantime.

I'll tell you what - in the last 6 months or so I've become a toaster oven whiz. I can cook just about anything in that thing, and I have - successfully. That may be another post in the future - how to get more mileage out of your oft-neglected toaster oven.

More about sweet potato fries now. Last night I had to use the oven. I just had to. Because it was there, and because I could - finally. So I roasted some julienned sweet potatoes. The trick here is to let the potatoes soften in the oven for a significant amount of time - soft enough that you could technically call them "done" and eat them, but you could never call them "fries." Once they're softened in the oven, you have to throw them in some hot oil. You just do.

When they're fried in oil after baking in the oven for the majority of their cook time, all the sugars and starches have softened and will very easily caramelize when dunked in hot oil. The outside of the fry becomes crispy like the top of creme brulee, but the inside stays mushy like any french fry should be.

Preheat the oven to 400 degrees. Cut the sweet potatoes julienne, then dunk in a bowl of cool water to soak for 5-10 minutes. 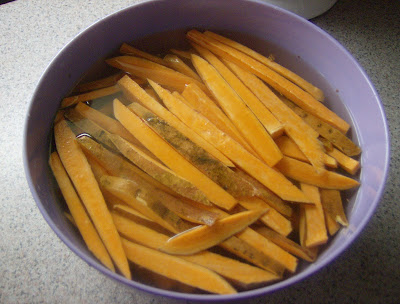 Pat dry, and toss sweet potato fries in olive oil, add sea salt and garlic powder, and toss around in a bowl to coat. Dump onto a cookie sheet or baking pan in one layer; make sure they don't overlap one another. Bake for 20 minutes. 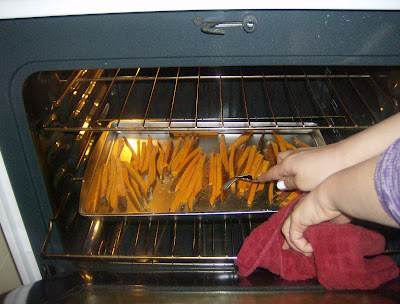 In the meantime, heat vegetable oil in a large pot. When the fries come out of the oven, drop a tester fry in the oil (350 degrees). It should float on the surface of the oil and brown relatively slowly - you don't want the oil to get too hot. When you're at the right temperature, drop them all in there at once. If they get tangled up, I don't care, but maybe you're a french fry purist. In that case, take your time and drop them in small batches. Actually, if you were a french fry purist, would you even consider sweet potato fries? 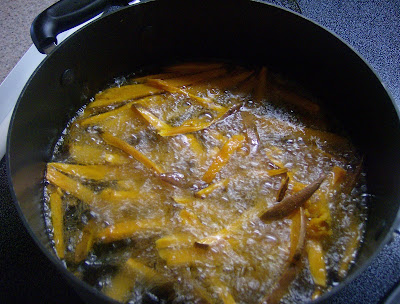 Let them fry away for 2-3 minutes, watching them fervently as they crisp and bubble away without burning, if you've been careful enough with your oil. When crispy, remove to a paper towel to drain, and sprinkle table salt over them immediately.

I like to serve these with a mix of ketchup and Sriracha - the spicy chili sauce really balances out the sweetness of the potato. I also like a mixture of wasabi powder, onion powder and mayonnaise.