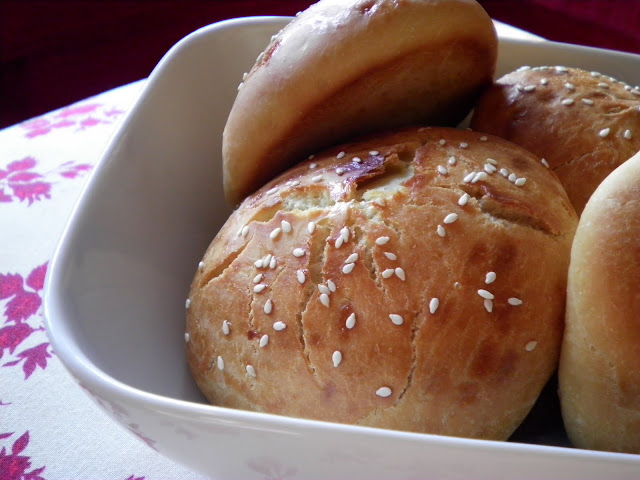 As much as I like to make bread and as often as I would rather make something at home than buy it at the store, I generally have no issue with storebought bakery bread. Yesterday, though, Josh propositioned that I change it up a little, and find a recipe for burger buns and make them at home. Why not?

I turned to Annie's Eats, which I can usually count on for a pretty dead-on version of any homemade store-bought item, and once again, I wasn't let down. Unfortunately, I screwed them up the first go-round.

Generally I like to measure flour in weight, not volume. So not really thinking about it, I measured out 24 ounces of flour (3 cups). It was only after my dough turned rock-hard that I realized I'd done something wrong - volume and weight are not always exactly interchangeable. Oh well. Next time I'll do the research first. I wound up having to go to the store anyway for more bread flour and briefly considered the stupidity of the situation...I was at the store, so why didn't I just pick up a pack of burger buns?

I forged ahead though, and after deflecting the snarky "you sure come here alot" comment from the grocery cashier, I quit trying to be cool and actually followed the recipe on my second attempt. The dough came together and rose flawlessly. The buns themselves were airy and crisp, and substantial enough to hold up my drippy early summer cheeseburger. 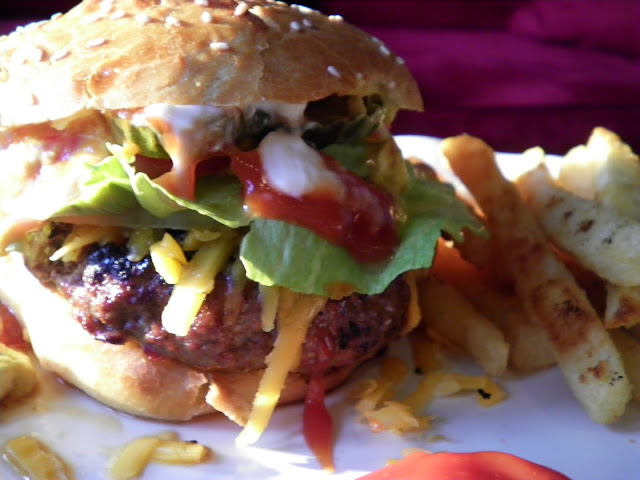 In the bowl of a stand mixer fitted with the paddle attachment, combine the milk, water, yeast, sugar, salt and egg. Mix on medium speed to combine. Add the flours to the bowl, and mix on medium speed until incorporated. Add the butter - make sure it's completely softened to avoid chunks of butter throughout the dough.

Switch to the dough hook and knead on low speed for about 6-8 minutes. This is a sticky dough, so don't add extra flour. Instead, flour your hands and transfer the dough to a lightly oiled bowl. Turn the dough to coat all the dough in oil. Cover with plastic wrap and let rise in a warm place until doubled in bulk, 1-2 hours.

Line a baking sheet with parchment paper or a silicone baking mat.  Turn the dough out onto a pastry mat, then divide the dough into 8 equal parts with a chef's knife.  Gently roll each portion of dough into a ball and place on the baking sheet, 2-3 inches apart.  Cover loosely with lightly oiled plastic wrap and let rise again, 1-2 hours, until nearly doubled.

Set a large metal pan of water on the lowest rack of the oven.  Preheat the oven to 400 degrees with a rack in the center. Brush the tops of the buns lightly with the egg wash and sprinkle with sesame seeds.  Bake the buns about 15 minutes rotating halfway through baking, until the tops are golden brown. Do not overbake! Transfer to a rack to cool completely. Split and serve with your favorite burger.