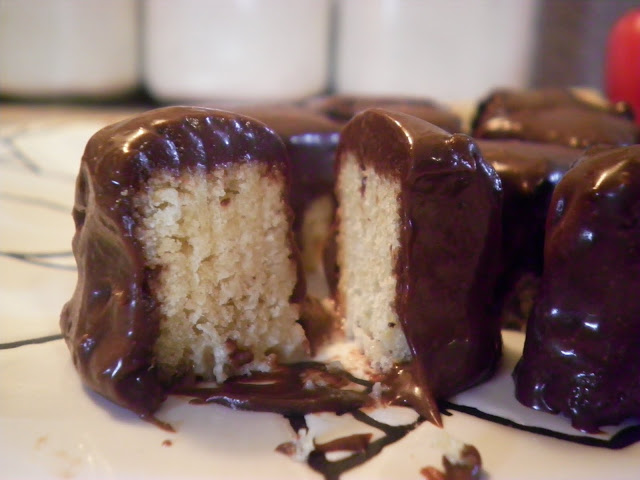 I found my first Daring Baker's challenge to be...well, challenging.

I do realize that's the whole point. I knew what I was getting into, if only from the examples I've seen around the blogosphere. And truth be told, if participating in these challenges is going to teach me anything, the biggest lesson I'll learn is time management.


The August 2010 Daring Bakers’ challenge was hosted by Elissa of 17 and Baking. For the first time, The Daring Bakers partnered with Sugar High Fridays for a co-event, and Elissa was the gracious hostess of both. Using the theme of beurre noisette, or browned butter, Elissa chose to challenge Daring Bakers to make a pound cake to be used in either a Baked Alaska or in Ice Cream Petits Four. The sources for Elissa’s challenge were Gourmet magazine and David Lebovitz’s “The Perfect Scoop.”
Ok, ice cream. It was about to be another in a string of 95+ degree days, and apart from that, it's definitely a new skill, which is why I set out to join this group in the first place.

Though we were given free reign on the type of ice cream to make, I didn't want to attempt spreading my creative wings too far this time around, given that it was my first challenge. My head swirled with ideas: coconut-lime ice cream, blackberry-lemon, chocolate and pretzel, etc. Instead I played it safe (or so I thought), with a classic chocolate-vanilla stracciatella (literal translation from Italian: torn apart).

Stracciatella is an Italian version of American chocolate chip ice cream (my favorite). Near the end of the freezing process, you simply drizzle ribbons of hot, melted dark chocolate over the frozen custard, and nearly immediately break it up, creating broken chips of dark chocolate running through the ice cream.

Nearly immediately. Remember I said that.

Infusing the milk with vanilla went well (vanilla beans on sale at World Market through September - 2 for $2.99!). 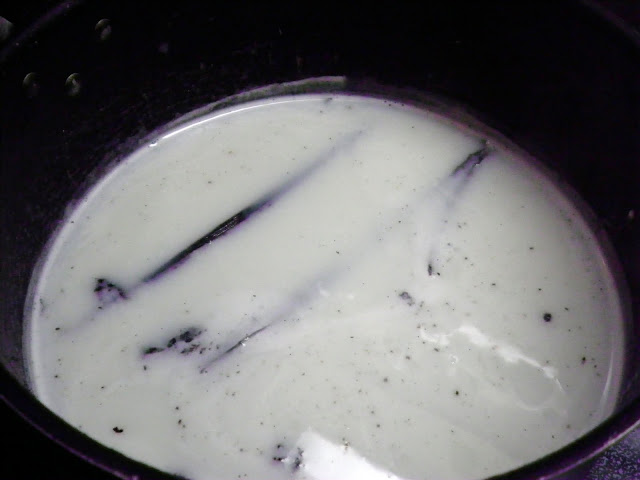 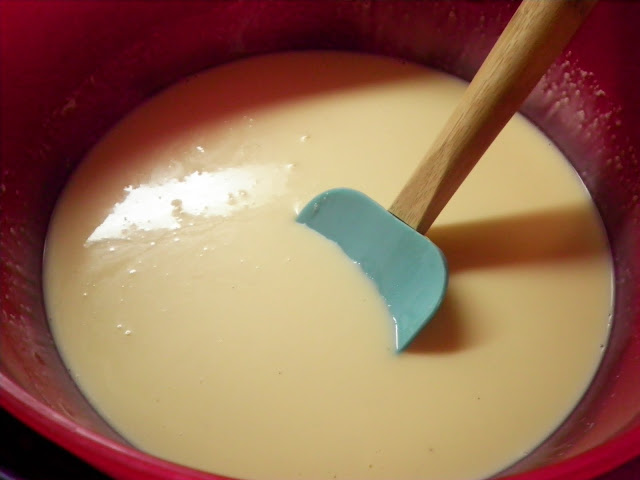 I was pleased with the taste, pleased with the way it was setting up in the ice bath. It went into the freezer at 7:00; I finally left the kitchen around 12:15. Because I don't have an ice cream maker - an appliance I'd have never deemed necessary until I attempted the process manually - I attacked the freezing ice cream with a hand mixer every 30 minutes in between. Two to three hours to until ready to eat, David Lebovitz? This is the first time you've ever led me astray.

At 11:45 in an otherwise sleeping house, I melted 5 ounces of dark chocolate over a double boiler, and pulled my almost-set ice cream out of the freezer. I drizzled the chocolate over the top, neglecting to break up the larger blobs (mistake #1), and set it back in the freezer for about 10 minutes (mistake #2).

When I pulled it out again, the chocolate was hard as a rock, but I proceeded to assail it with my hand mixer regardless (mistake #3). Chocolate flew everywhere as the whirling beaters struck the hardened blobs, splattering my countertops with dark, sticky lumps. Panicked that I might soon fling chocolate within reach of the sleepily curious dogs at my feet, I gave up on the mixer and pulled the bigger chunks out with my fingers. I started to chop them on a cutting board, but the clonk of my knife meeting frozen chocolate was not a sound suited for midnight. So I brought out the cheese grater and grated the blobs until my fingers were dripping with body heat-melted chocolate.

I then gave up completely, took one final picture of the mess I'd created: 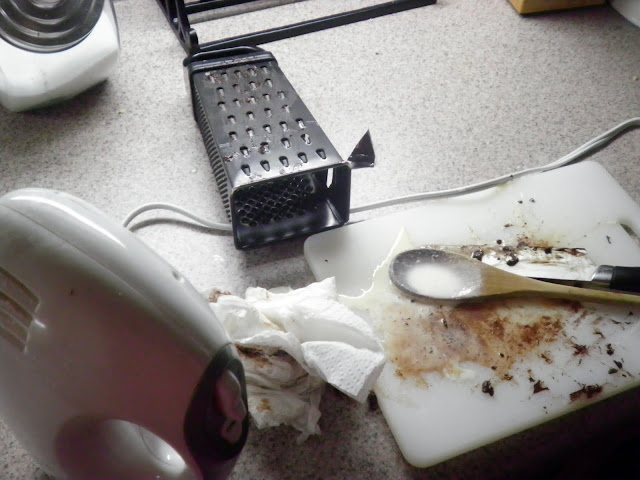 And flopped into bed.

In the morning, the stuff actually looked pretty good. I fluffed it up a bit with a fork, and let it melt just a little bit later in the evening so I could have a go at it one more time with the hand mixer. 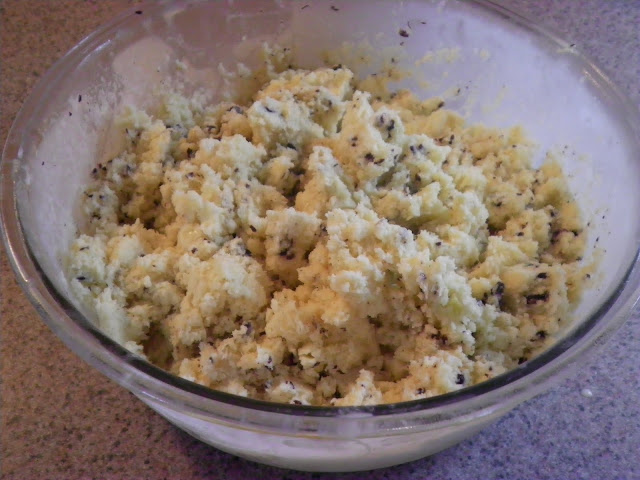 The melting before the last freeze turned out to be the key: even though Josh eschewed the mixer and volunteered to stir it by hand, it re-froze creamy and smooth, and I had to stop everyone in the house from progressively chipping away at my ice cream supply. It turned out to be precious stuff, after everything I had to do to get it there.

Making the pound cake went smoothly. Aside from the 19 tablespoons of butter (the browned butter added a lot of depth to the taste of the batter, but honestly I could not taste it in the final product), the process wasn't much unlike any other cake I've made in the past. Plus, I found myself a sous chef for challenges to come. 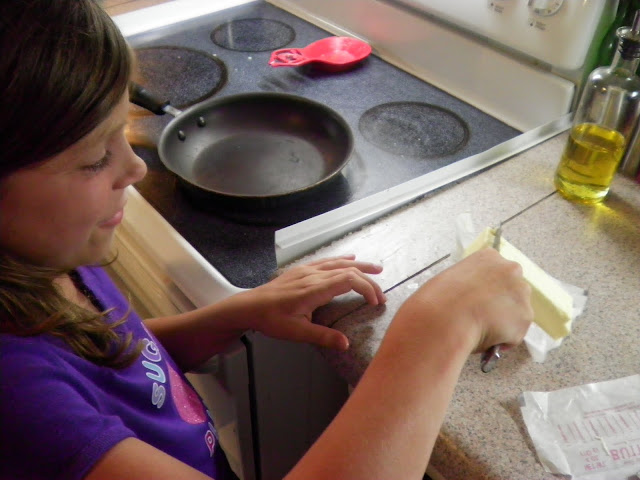 Frankly, I can't be bothered to write much about the cake, assembly or glazing - even though the glazing turned out to be a huge nightmare - lest this saga continue much longer. In the end, I wound up with 12 cute iced petits four, which was decidedly less than the number of lopsided, melty rectangles Josh and Alyssa ate off the pan (the first picture in this post, of a petit four cut in half, is without ice cream. It separated from its other half and I was dumb enough to use that one as the display picture). 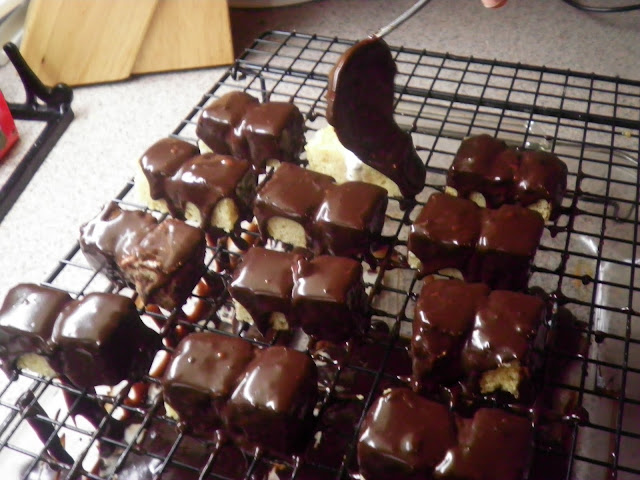 If I were to make this recipe again, it should come as no surprise that I'd more than likely make a full-size cake, and I will utilize store-bought ice cream - impressed though everyone was that the ice cream was both delicious and made without a machine.

Here's a link to the recipes and the original post (and some examples that turned out better than mine did).