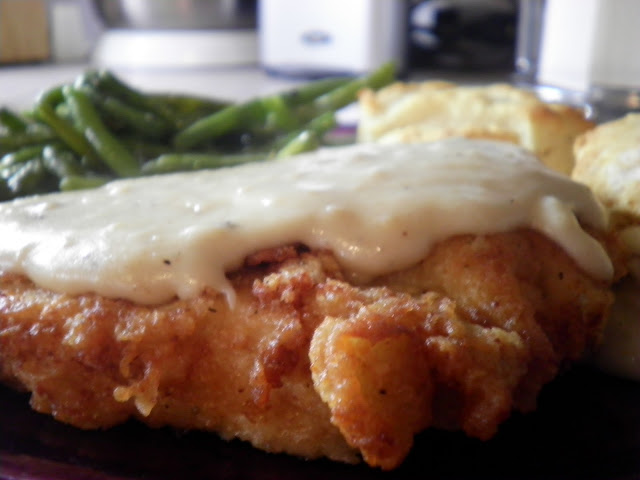 Before I post a new recipe, I always consult Food Blog Search beforehand out of curiosity. I want to know how many other times it's been blogged, and frankly I want to know if someone's pictures of a similar dish are better than mine (they usually are).

At this point, I've lived outside of Texas long enough to know that the majority of the country isn't familiar with migas, Chuy's (praise the lord that Chuy's made it to Nashville!), or breakfast tacos, but I was honestly surprised not to find more than one or two small mentions of chicken fried chicken. Chicken fried steak, yes...there were plenty of posts about that.

Maybe because it's redundant, you'd say. Perhaps it is, in a linguistic sense. But chicken fried chicken is not fried chicken.

Well...I mean, it is. But not the sort you can get from a bucket basking in the glow of a deli counter's heat lamps. It is always a boneless, skinless chicken breast dredged in seasoned flour and pan-fried, and it is always served with cream gravy. And it is always a fork and knife meal. Texans are sophisticated like that.

The rest of the country just has to know!

Pound chicken with a meat tenderizer until flattened and almost doubled in size. Place flour in a large bowl and season with salt, pepper, onion powder, garlic powder, and cayenne pepper to taste.

Mix eggs in another bowl with milk. Coat pieces of chicken in flour. Dip coated chicken into egg mixture and then dip back into flour again.

Heat on medium enough oil to fill halfway up the sides of a cast-iron skillet. When a drop of water makes the oil sizzle, it's ready for frying. Place the chicken in the skillet. When the chicken is golden brown on the bottom, gently - without splashing! - turn over with a long fork

Cook another five minutes and then take the chicken-fried chicken out of the pan and drain on a paper-towel-lined plate or cooling rack.