My brother, frequent guest blogger Craig, loves toast so much that he had it tattooed on his body. My brother, medical student and anesthesiology tech, has a toaster tattoo on his leg. 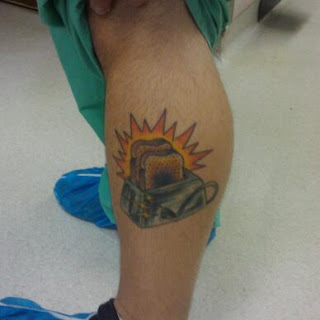 I kid about his love of toast. This tattoo is not a profession of his love for bread. It's the result of a long-running inside joke between he and my dad - a joke that nobody ever could have imagined during a discussion about tattoos between my dad and a 14 year old Craig would actually come to fruition in the form of flaming toast on Craig's leg. I believe my dad was illustrating what he believed to be the stupidity of putting anything on your body permanently (also never guessing that one day his adult children would have 19 tattoos between the two of them).

Dad: "You want a tattoo? How about a toaster? Or a potato? Or a fire extinguisher?"

In a weird Craig way, it's actually kind of sweet - he did it for my dad. While the toaster wasn't his first tattoo, I'm certain that it's his most talked-about tattoo. Good thing he has to wear those scrubs every day to keep it under wraps.

Although I do have my share of ink, and though I do love food, I have no food-related tattoos. Would you ever tattoo food or cooking implements on your body? If so, what do you love enough to permanently associate yourself with?